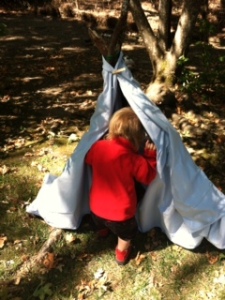 Today was one of those days when after a morning adventure down at the Sonoma County Regional Park, the boys just wanted to explore the backyard.  They found some pretty long sticks.  In an attempt to keep them from sword fighting, I asked the boys if they wanted to build something.  I already knew that the boys would want to do this as both of them love building anything.  Inspired by a friend who just built a teepee for a party they’re throwing, I thought about recreating a mini version for the boys.

The entire process was fun and a reminder of why life out here in the country is so fabulous.  After finding the long sticks, the boys helped hold up the sticks while I tied them together with green rope.  Wrap it up in an old sheet secured with clothespins, and voila – a cozy spot where a child can chill, giggle and make believe.

As soon as it was done, the boys crawled in and spent time laughing. I’ll never know what exactly they were laughing about (nor does it matter).  One thing is for sure though I will always be tickled pink by the memory of creating a space where they were so happy to be themselves.

2 thoughts on “What’s in your backyard?”